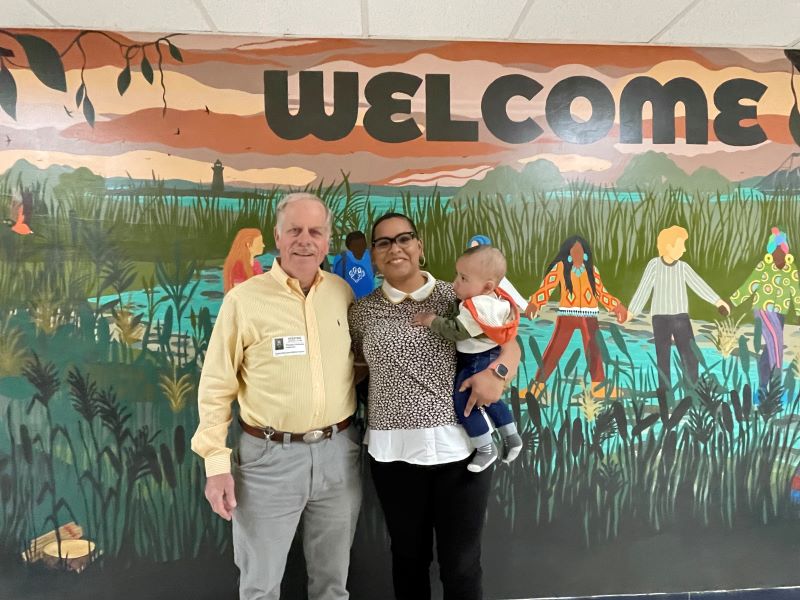 OLD LYME — UPDATED WITH FULL STORY: Around 40 members of the community along with several Old Lyme and Lyme-Old Lyme Schools dignitaries joined some 200 Lyme-Old Lyme Middle School students and faculty on Wednesday to celebrate the unveiling of a new Welcome mural, which had been sponsored by Public Art for Racial Justice Education (PARJE) and created in the school.

The mural is part of the Sister Murals Project sponsored by Public Art for Racial Justice Education (PARJE), which was officially launched March 1, 2021. PARJE utilizes the broad appeal of art and education to confront racial injustice.

One mural has already been unveiled in Norwich and now murals are being worked on concurrently in Old Lyme and New London. Jasmine Oyola-Blumenthal, who is an alumna of Lyme Academy College of Fine Arts, is the lead artist of the new Welcome mural in the Lyme-Old Lyme Middle School (LOLMS.)

In addition to her role as lead artist, Oyola-Blumenthal worked with school faculty to develop student workshops, which coordinated with the project.

Oyola-Blumenthal and her counterpart, Marvin Espy, in New London were selected from a field of nearly 20 applicants. In her application, Oyola-Blumenthal had described art as, “a neutral vessel,” contending that [it], “Can bring forth conversations that can be uncomfortable and promote opportunities to open dialogue on racial justice and education.”

Superintendent of Lyme-Old Lyme Schools Ian Neviaser opened the ceremony and then a number of speeches were made including one by Kimberly Monson, a professional artist, who studied at Lyme Academy College of Fine Arts, and subsequently became one of its faculty. She, in fact, had taught lead artist Oyola-Blumenthal when the latter was a student at the same college.

Monson noted, “An artistic legacy is passed from instructor to student and is a direct line to the artists and instructors before them. Therefore, with her training, Jas’s [Jasmine’s] pedigree can be traced back to artistic behemoths such as Saint Gaudens and Gerome.”

Monson then commented on Oyola-Blumenthal’s own legacy and its relevance to the project, saying, “Jas also has a legacy in her heritage. She holds within her … the hopes and dreams of embracing diversity, which, in addition to her talent, give her an insightful perspective to this Mural project … [She carries] the legacy, of not only the Artists housed and trained here, but also [in her role] as the voice of collaboration with our kids.”

Monson spoke warmly of Oyola-Blumenthal’s skills saying, “Jas’s sense of design was always powerful. She knows how to arrange a picture to tell a story and she has a strong command of color and pattern that celebrates her contagious optimism,” emphasizing, “All of this shows itself beautifully on the Mural painted in your hall.”

Three LOLMS eighth grade students read their poems related to the Witness Stones project in Old Lyme, in which houses where enslaved people were kept in town have been identified by engraved stones placed in front of them. The students were Maggie Thuma, Thomas Kelly and Anne-Marie Hinkley.

Thelma Halloran, who is the LOLMS art teacher also spoke during the ceremony. She had collaborated with Oyola-Blumenthal on many parts of the mural project. She explained how she had become involved with, “a new group in Old Lyme created by the Rev. David W. Good, Minister Emeritus of The First Congregational Church of Old Lyme.”

This group, which became PARJE, was created more than a year ago in response to tragic events in the news like the death of George Floyd. Halloran said, “David wanted to remind everyone in Old Lyme that the town has a history of welcoming people – all kinds of people.”

She then listed some of those who had been welcomed into the town mentioning four refugee families from Laos, a refugee family from Rwanda, and another from Syria. She also recalled a family from the Congo, who lived in a refugee house bought by the Congregational church and families from Pakistan, Guatemala, Burma, and South Africa. In addition, she mentioned a family, whose home was destroyed by a hurricane in Puerto Rico, who also found a home in Old Lyme.

Halloran noted, “This history of hospitality to all who come to Old Lyme has evolved through time. It has not always been perfect. This is why there is a continued effort to strive to be a better community, including in our schools.”

Urging the students to, “continue to show your kindness” to everyone in school including such people as custodians, security guards, secretaries, and paraprofessionals, she then told them also to, “Show your kindness to the student, who looks like you, but doesn’t think like you.” explaining firmly, “This is what we mean when we say welcome.”

Editor’s Note: Visit this link to see the video NBC TV posted about the event.