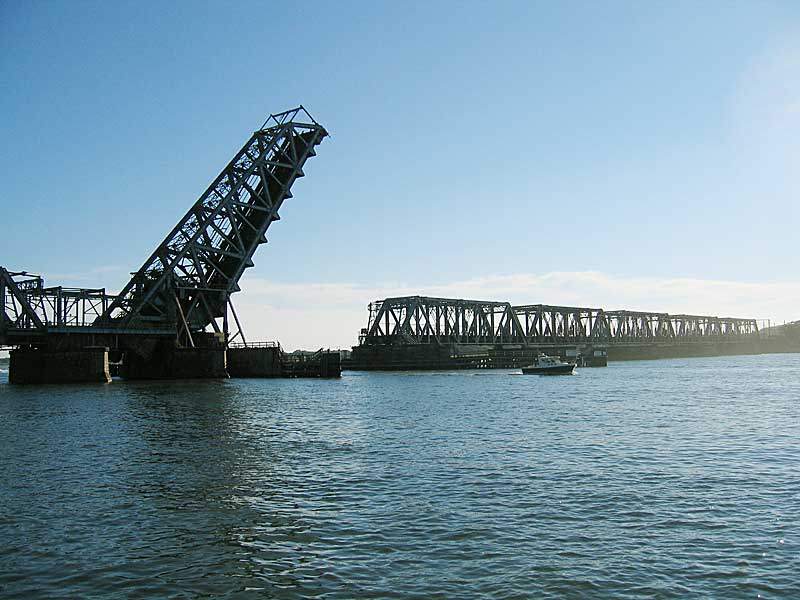 The funds will be used for two significant capital projects that improve safety and reliability along the Connecticut-owned New Haven Line and the Amtrak-owned Shore Line East, ensuring no disruptions occur along the Northeast Corridor. They are being awarded under the Federal-State Partnership for State of Good Repair Grant Program.

The first grant, in the amount of $65.2 million, will support the replacement of the existing Amtrak-owned Connecticut River Bridge between Old Saybrook and Old Lyme with a modern and resilient new moveable bridge.

The project will improve safety, reliability, and trip time. Maximum speeds will increase from 45 miles per hour on the current span up to 70 miles per hour. The increase to 70 mph afforded by a more modern miter rail design will be a marked improvement: however, speed restrictions on the curves on either side of the Connecticut River Bridge will still be required but will be optimized to achieve maximum impact.

The existing 115-year-old Connecticut River Bridge poses a significant risk of long-term disruption to the Northeast Corridor due to its age and condition. The bridge was opened in 1907 and is the oldest rolling lift bascule span bridge between New Haven, Conn. and Boston, Mass.

The bridge spans the Connecticut River 3.4 miles north of the mouth of the Long Island Sound. It serves the Northeast Corridor main line and is used by Amtrak’s intercity service, Shore Line East (SLE) commuter rail service, and freight operators. Approximately 38 Amtrak trains, 12 CTDOT (SLE) trains, and six Providence and Worcester Railroad trains travel across the bridge each weekday, a total of 56 trains per day.

The bridge has a movable span that is raised up to allow boats to pass. The Connecticut River Bridge fails to open and close properly, which has led to cascading delays to rail and maritime traffic. Due to its age and deteriorated condition, the operational reliability of the existing bridge is at high risk.

The replacement bridge will maintain the two-track configuration and existing channel location and provide a moveable span with additional vertical clearance for maritime traffic. Delays from bridge openings will be significantly reduced, and Amtrak will realize maintenance savings from the new structure.

This grant marks the second Federal-State Partnership program contribution toward the project since an additional $65.2 million was awarded in fiscal year 2020. The Connecticut Department of Transportation and Amtrak will provide a 38 percent match of the grant.

The second grant, in the amount of $20 million, will support phase one of the Connecticut Department of Transportation’s overall plan to replace the seven power substations along the New Haven Line, beginning with the replacement of the first two.

These substations have not been repaired or renovated since the 1980s.

The upgraded substations will be more reliable, more energy efficient, and less costly to maintain. The aging power infrastructure poses a significant risk of rail service disruption, and maintaining the assets is essential to ensuring reliable train service for passengers.

Connecticut Gov. Ned Lamont commented, “We all know how critical the Northeast Corridor is for job creation, economic growth, and environmentally friendly transportation. Our administration has a vision for faster, more reliable, and greener public transportation, and we are doing everything possible to make that vision a reality. Thanks to these grants, that reality is moving one step closer.”

In a joint statement, the members of Connecticut’s Congressional delegation said, “The Northeast Corridor is one of the busiest rail lines in North America, with more than 144,000 commuters using the New Haven Line and Shore Line East daily to travel to work or visit family.”

He added, “The funding from these grants will help modernize the infrastructure in the state and improve the reliability of both commuter and intercity train services to provide a better travel experience for Connecticut residents and visitors.”

Editor’s Note: This article is based on a press release issued Aug. 18, from the Office of CT Gov. Ned Lamont, and information published on the Amtrak.com website about the Connecticut River Bridge.