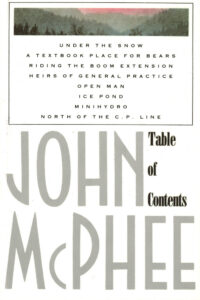 ‘Bear’ with me: this review is the result of strange circumstances.

In mid-April I received an email from some Lyme neighbors, announcing a new resident with a photograph – a black bear strolling unceremoniously along Ely’s Ferry Road. As it happened, I had just started a re-read of one of my favorite authors, John McPhee, and his 1985 series of essays.

The very first two described the growing advent of black bears into eastern Pennsylvania and northern New Jersey, and the second the efforts of a New Jersey biologist and bear-trapper, Patricia McConnell, at work in her home state.

Black bears are curious, vegetarian, nocturnal creatures, as interested in human beings as we are instinctively afraid of them. What I learned in McPhee’s essays made me wish I was still living in Lyme!

But black bears are also cavorting up here in Massachusetts — my physical therapist reported one in her family’s back yard just a few days ago. How interconnected we are!

McPhee’s essays continue with a lengthy dissertation on the growing interest in doctors becoming “General Practitioners” (GP’s), as he relates their efforts, travails, and joys in the northern extremes of the State of Maine. He extols the “omniscient, ubiquitous” GP as a real aberration in the growing specialization of taking care of us fragile human beings.

He determines that the greatest skill of the GP is a willingness to sit and listen to our stories of our ills and ourselves. How many docs these days really sit and listen?

McPhee then moves quickly to a story of following ex-Senator Bill Bradley in a campaign stroll along seaside towns on the Jersey Shore. In it he displays his unique capability of describing what each person is wearing, from hat to shoes, as well as distinctive facial expressions. “He wears a blue-and-white striped shirt with a button-down collar. His tie is brown and has small New Jerseys all over it like sea horses.” It is a perfect, yet brief, follow-up to his best-seller, A Sense of Where You Are”.

Another essay relates the growth of “mini-hydros”, the resurrection of eroded old dams, their waterways and ancient turbines to take advantage of new legislation requiring power companies to buy small bits of electricity produced by these revived facilities. Again, curious and ambitious entrepreneurs willing to take a chance. And risk their modest funds.

And finally, the author’s last essay describes his meeting, and working with a Northern Maine bush pilot, named, of all things, John McPhee (better known as Jack.)

As the author explains, “ There is a lot of identification, even transformation, in the work I do – moving along from place to place, person to person, as a reporter, a writer, repeatedly trying to sense another existence and in some ways to share it.” What an extraordinary thing to meet a State of Maine Bush Pilot with your name!

If you’ve seen a black bear recently, do read John McPhee. With the continuing chaos in the daily news, reading this author is a distinct relief.