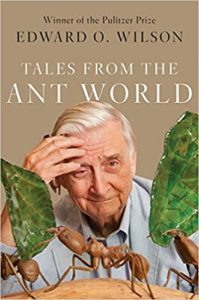 Are ants far more important than we humans?

That’s my conclusion after reading the latest from this illustrious Professor Emeritus of Harvard with some 33 books to his credit, many of which relate his life-long interest in these creatures

Ants, or the study of myrmecology using the proper scientific terminology, have existed on this earth for some 150 million years, 10 times longer than Homo sapiens. They are survivors of ice ages and hot spells. They operate on this globe in both extreme heat and cold.

Significantly for these times, they are not disease carriers.

They create societies in which females are in complete control (“benevolent matriarchies.”) Males are second-class citizens, primed to exist for one act of reproduction and then depart this life. Ouch!

And, like us, they have traveled from Africa to almost every other spot on earth. They are also “virtuosos of chemical communication,” working together soundlessly. To top it off, they will probably outlive our species by another 50 million years, or at least as this earth exists.

“Ant colonies possess superb resiliency,” suggests Professor Wilson, arguing that we humans should study them more seriously. Compared to the bulk of a human body, an ant is tiny but “ … all the living ants weigh about the same as all we living humans. We don’t go to war against ants, nor do they war against us.”

To Wilson, this proves “an important principle of parasite biology … that the most successful parasite is the one that causes the least damage.” But they are vicious warriors among themselves … very similar to human beings.

Yes, they do travel: ants are great navigators. They manage to move about, “by direct light of the sun and dead reckoning (“dead”  product of “deduced” reckoning) by the spatial gradients of polarized light, spectral composition of light, and the radiant intensity that form cover across the entire vault of the sky.” I do wish I had those capabilities when I navigated my U. S. Navy refrigerator ship across the Pacific some 60-plus years ago!

Can studying ants give us some ideas about the future of human beings? Females in total control — but the “queen” is effectively a slave of the entire colony? Incessant warfare with other colonies? But ultimately, ants are survivors, outlasting us by millions of years.