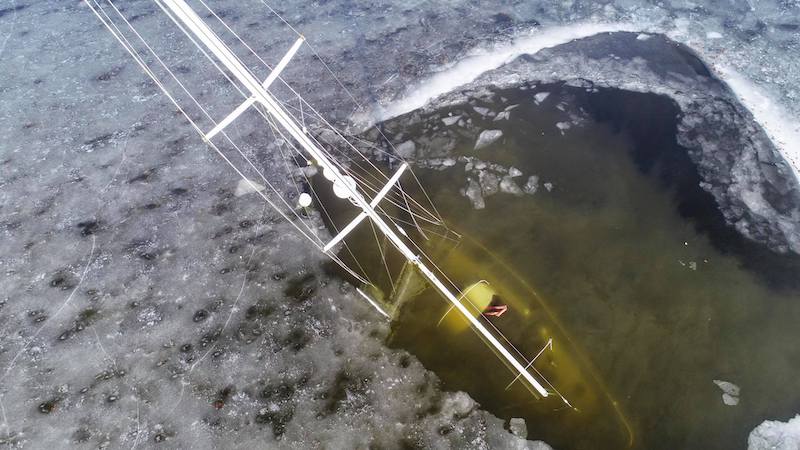 Frank Dinardi of East Haddam has become an overnight social media sensation with an extraordinary video that he captured of a boat initially at its mooring in Hamburg Cove,Lyme, and then subsequently after it had sunk last week.  His video has now been viewed over 150,000 times and he also has taken numerous photos that are posted on his Facebook page of various stages of the whole sad episode.

He told LymeLine.com via an e-message, “I work for a local landscaping company and we do a lot on Hamburg Cove. I’ve been watching the boat all year along with the neighbors on the cove wondering what it’s doing in the water and why it hasn’t been taken out?” adding, “It’s a boat that often catches my eye in the summertime as I think it is beautiful and I’ve photographed it with my drone in the summer too.”

Dinardi continues, “When I saw the ice building up around it I had to go back and grab some photos of it and decided to take some video. On the evenings and weekends I operate a growing photography and videography business called Frank’s Sky Sights. So I had gathered some video a couple weeks ago and then last weekend somebody had wrote me telling me that the boat sank and I should go check it out.”

He concludes, “So I went down there and flew around the boat again with my drone and was able to get the footage of the boat underwater. I went home and put that video together and it instantly became a hit on social media.”

He has now prepared a follow-up video in which he answers many of the questions that have been raised from the first video.  The link to the second video is: https://www.youtube.com/watch?v=C244qqEIzi0&fbclid=IwAR1Gmutmin5w-u-Mjhdcx42IqpvGx7CWsE1lkQ46F9CAVeytSYQK6DMIyqw