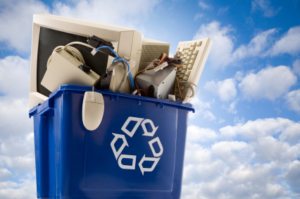 In this article we cover the more complex topic of managing electronics at the end of their useful life; i.e., what should we do with our e-waste? The topic is especially pertinent right now because — I’m certain — that more electronics move in and out of our homes during the holidays than at any other time of the year.

Scope of the Problem

Proper disposal of e-waste is a very significant issue. According to the Environmental Protection Agency (EPA), more than 2.5 million tons of e-waste are produced each year in the United States. The majority is not recycled, so most of our discarded electronics are ending up in landfills; the EPA estimates that less than one in 10 mobile phones is recycled, and only about 25 percent of all e-waste is collected for recycling.

If you’re checking the math, some of the rest gets donated; but according to EPA pundits, almost three quarters of computers sold in the United States end up stockpiled in garages, basements, and closets waiting to eventually enter the disposal stream.

Our e-waste contains materials that are toxic if improperly handled at disposal. These toxic chemicals, which can leach into the soil over time or be released into the atmosphere, include cadmium, lead, mercury, hexavalent chromium, and brominated flame retardants. Incineration releases these heavy metals into the air.

Mercury released into the atmosphere can bio-accumulate in the food chain, particularly in fish, a major route of exposure for the general public. If the products contain PVC plastic, highly toxic dioxins and furans are also released.

Moreover, electronics are made with valuable resources like precious metals, engineered plastics, glass, and other materials — all of which require energy to manufacture. When  equipment is discarded, these resources cannot be recovered and additional cost is incurred to manufacture new products from virgin materials.

Further, lanthanides, also known as rare-earth elements, are used to make magnets found in computers, cell phones, and many other consumer “gadgets.” Until recently, China was the main producer of these raw materials, giving that country an advantage in setting market prices. As a result, the U.S. Department of Energy developed an initiative to recover lanthanides from electronic waste.

It was/is common practice for developed countries to export their e-waste to developing countries, which may not have the resources to safely recycle and dispose of used electronics.  In the United States it is estimated that about a quarter of the waste collected for recycling is still being exported in this manner.

In 2001, the Basel Action Network (BAN), a non-governmental environmental organization based in Seattle, led an investigation of e-waste processing in China, India, and Pakistan. The investigation, which included sophisticated electronic tracking of recycled televisions, uncovered an entire area northeast of Hong Kong where migrant workers were employed breaking apart obsolete computers imported primarily from North America. The workers, who included children, were not using contemporary safety and anti-contamination precautions.

FRONTLINE’s coverage of the investigation can be viewed at: http://www.pbs.org/frontlineworld/stories/ghana804/

BAN is named after the 1989 Basel Convention, a United Nations treaty designed to control and prevent the dumping of hazardous waste from developed to less developed countries. BAN serves as a watchdog and promoter of the Basel Convention and its decisions.

There is still no federal law that requires the recycling of electronic waste or prohibits it from being exported to developing countries. There have been some efforts in Congress to pass a bill that would make overseas dumping of toxic e-waste illegal, but the Responsible Electronics Recycling Act (RERA) has been stuck in the House for more than two years.

Consequently, individual states began to take action. California passed an electronics recycling law in 2003, the first state to do so. Connecticut passed its law in 2007, and 27 other states and the District of Columbia have since followed suit.

However, unlike mattresses and paint, which were covered in past articles, where the consumer pays a fee at the time of purchase to support the recycling program, Connecticut’s law requires manufacturers to finance the transportation and recycling of these electronics. It also requires recyclers of electronics to be approved and monitored by the CT Department of Energy and Environmental Protection (DEEP).

The local drop-off location for recycled residential electronics is the Old Lyme Transfer Station on Four Mile River Rd. There is no charge for drop off. Large electronics retailers like Best Buy and Staples also have recycling programs in place.

Recyclable CEDs currently include the following:

In contrast, e-waste from non-residential sources (i.e., commercial, governmental, retail, etc.) is regulated under current federal and state hazardous waste and solid waste laws and should not be dropped off as recycled residential electronics.

Under Connecticut’s recycling program, approved recyclers are required to establish data security practices. They must secure hard drives until such point that they are physically destroyed for recycling. If they intend to reuse or resell the computer, they must erase (“wipe”) the hard drive to a Department of Defense standard.

If you are concerned about data security, you can erase the hard drive prior to dropping off the device for recycling. There are several ways to erase a hard drive.  It is possible to perform this yourself at home, but it may be a bit complicated for those not facile with desktop computing. Paraphrasing recent political history, it’s not just “Like with a cloth or something?” Retailers like Best Buy and Staples may also perform this task, but for a charge. About a month ago Staples in Old Saybrook quoted a price of $29.99.

DEEP has information on inexpensive software that can be used to permanently erase the data on your hard drive at: http://www.ct.gov/deep/cwp/view.asp?a=2714&q=397852&deepNav_GID=1645#Security

Our next article will cover the recycling of tires, and bulky items like appliances and furniture.

If you have questions or comments, contact: Leslie O’Connor at alete1@sbcglobal.net or Tom Gotowka at TDGotowka @aol.com.