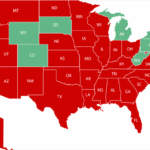 UPDATED 08/10: New Comment -- Hi! This is Connecticut. You know, the little northeastern state with great pizza, high quality of life, and New England charm? Doesn’t ring a bell? We’ve got small cities and a beautiful shoreline and grouchy people and … still no, huh? Okay, fine. We’re the one between Boston and New York with the traffic jams. Know who we are now? … END_OF_DOCUMENT_TOKEN_TO_BE_REPLACED

Last week, Vermont Senator Bernie Sanders tried to force the Democratic National Convention into a shape more to his liking by demanding that Gov. Dannel P. Malloy, a supporter of former Secretary of State Hillary Clinton, be booted from a high-profile chairmanship. He failed, but the fact that he tried says something about both Malloy and the dangerous state of our politics … END_OF_DOCUMENT_TOKEN_TO_BE_REPLACED