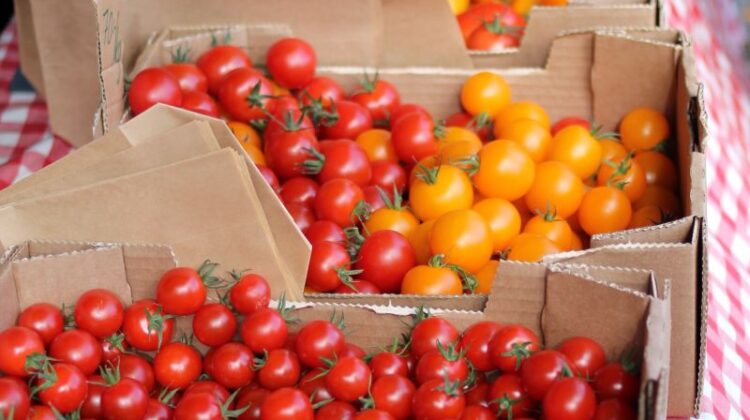 When I received my Food Network Magazine, I was, as always, taken by the cover: The Secret to a Perfect Pesto.

But in the Editor’s Letter, I was even more taken with words: “… In looking back at all the September covers in this magazine, about half of them show some variations of corn, basil and tomatoes. … So why should we question putting the farmers’ market trifecta on there every September?” says editor Maile Carpenter (whose husband, brilliant chef, Wylie Dufresne, “hates tomatoes and passed that rare and terrible trait onto our children.”)

Aha, I thought. When national food editors see no reason to not bet on a full-bore reason, neither will I. For this week and the next two, I will give you two recipes. One will include a recipe for the ingredient du jour (today, tomatoes) and the second a ‘how to’ piece with a way to save each of these this so-local and so-delicious ingredients for many winterish dishes.

So, here we go with tomatoes, and it begins with note from friend Steve Setless, a friend from high school who asks quizzically: ‘If most of us know that tomatoes are a fruit and not a vegetable, and we all know not to put tomatoes in a fruit salad, then do we assume that Bloody Mary is actually a heathy smoothie?!’ 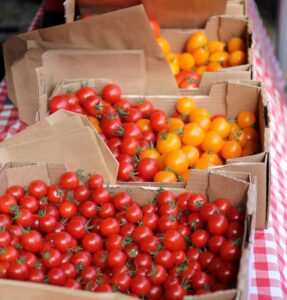 In a medium bowl, whisk vinegars, sugar and salt and pepper to taste. Whisk in olive oil and ginger. Taste for seasoning.

Arrange tomatoes in a single layer on a baking sheet and season with salt. Using a scissors, snip basil into smaller pieces and sprinkle over tomatoes. Transfer to a bowl, then toss tomatoes with dressing and celery, Spoon over grilled bread.

Today’s Tomatoes for Next Winter

I wrote about roasting tomatoes three years ago, but maybe you forgot. Just in case, we have less than a month before delicious tomatoes are merely a memory. The best tomatoes for roasting are the plum, or sauce, tomatoes. And they might be less expensive by mid-September.

Here is what to do:

In a large baking sheet(s) lined with foil (for easy cleanup), place cored tomatoes (cut in half vertically if using plum tomatoes, horizontally if using regular tomatoes) cut side up. Lightly salt and then drizzle with just a little oil. Place sheets in preheated 275 degree oven and roast for around 3 to 4 hours. When cool, place about half a pound of tomatoes into plastic bags for the freezer. Next winter, when you decide to make stews, pasta sauce, meat loaves or side dishes, add some of those summer tomatoes to other recipes and pretend it is still summer.