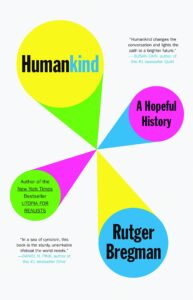 Ah! In the midst of a global pandemic and toxic political strife almost everywhere, it is a sheer delight to be encouraged by some optimism.

Rutger Bregman, a Dutch historian, asks some serious questions: are we humans not basically bad, but innately “good? Do crises actually bring out “the best in people” rather than the reverse? Is “resilience . . . universally human”?

He readily acknowledges that we have been immersed for centuries in the idea that we are fatally flawed, an idea thrust on us by religions and many secular ideologies.

“Quite a few religions,” he argues, “take it as a tenet of fact that humans are mired in sin”; that our “news” is a daily drug of negativism, and the annals of our “history” glorifies the “winners” without acknowledging any of the ideas of the losers.

The point of this book: “ … our grim view of humanity is due for radical revision.” He argues “humans, in short, are anything but poker-faced. We constantly leak emotions and are hardwired to relate to the people around us … Our spirits yearn for connection … We are not alone. We have each other.”

His key question: Are humans naturally non-violent, and have we been so for hundreds of thousands of years, or have we evolved, slowly, to be more and more passive? He challenges Stephen Pinker’s thesis, in The Better Angels of Our Nature, that we are slowly and inevitably evolving toward pacific relations.

No, says Bregman: we have always been that way!

He illustrates his argument with numerous fresh analyses of situations and cases, such as the Stanford Prison experiment, the Stanley Milgram “shock” experiment at Yale, the facts about the settlement of Easter Island, an innovative prison modification in Norway, the case of two white South Africans who helped Nelson Mandela, and the famous joint celebration of Christmas Eve by Allied and German troops in December 1914.

So how can we support and enhance this native human instinct? Bregman argues that education continues to be the key: “the freedom to go wherever curiosity leads. To search and discover, to experiment and to create. Not along any lines set out by parents or teachers [or religious and political leaders, I will add.] But just because. For the fun of it.”

This means more contact: “contact engenders more trust, more solidarity, or mutual kindness. Does this mean we should redesign completely our schools? A challenging thought.

Bregman, following many writers, concludes this challenging thesis with “Ten Rules to Live By:” But, being an octogenarian, I find it most difficult to remember more than three things, so here are my three rules, synthesizing his ten:

But first, read this book …

About the Author: Felix Kloman is a sailor, rower, husband, father, grandfather, retired management consultant and, above all, a curious reader and writer. He’s explored how we as human beings and organizations respond to ever-present uncertainty in two books, ‘Mumpsimus Revisited’ (2005) and ‘The Fantods of Risk’ (2008).
A 20-year resident of Lyme, Conn., he now writes book reviews, mostly of non-fiction, a subject which explores our minds, our behavior, our politics and our history. But he does throw in a novel here and there.
For more than 50 years, he’s put together the 17 syllables that comprise haiku, the traditional Japanese poetry, and now serves as the self-appointed “poet laureate” of Ashlawn Farm Coffee, where he may be seen on Friday mornings.
His late wife, Ann, was also a writer, but of mystery novels, all of which begin in a village in midcoast Maine, strangely reminiscent of the town she and her husband visited every summer.