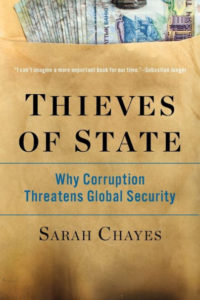 What happens when you see blatant corruption first-hand?

Is this the world we now inhabit?

Sarah Chayes, a former NPR correspondent, entrepreneur and foreign policy specialist, now with the Carnegie Foundation, has seen it all and has fought it, not always successfully.

She describes her personal experiences in Afghanistan, Morocco, Algeria, Tunisia, Egypt, Uzbekistan and Nigeria, with further stories from Europe, England and the United States.

Corruptions (including shakedowns, extortions, favors, subsidies, graft, “lubricities,” and those famous “services” of Don Corleone) are the stimulants of inevitable upheavals. Yet many warned us against its practice: Machiavelli, William of Pagula, and Abu Hamid Muhammad al-Ghazali, among others, but we never listen.

Others write that “corruption” is an inherent, genetic inclination of our human brains. Francis Fukuyama, in Political Order and Political Decay, suggests “reciprocal altruism” enabled our species to work together for growth and progress.

Yet that “altruism” is easily subverted into “patronage, clientelism, and the creation and extraction of rents.” So Chayes concludes: “acute government corruption may in fact lie at the root of some of the world’s most dangerous and disruptive security challenges.” The anger at blatantly corrupt “systems” often leads to radicalizing young people.

She describes three levels of corruption:

The latter may be the most insidious.

A uniform often “removes a person’s individuality; its wearer becomes a faceless member of a mass movement . . . “ easily led by other lemmings. That is why “military-to-military relationships” are so potentially corruptible.

Have we inadvertently drifted into this problem here in the U. S.? Are we being “bulldozed by an over-weaning military?”

Chayes notes our “almost instinctive reflex to lead with the military in moments of international crisis.” Government may be both the cause and the solution to corruption. The Founding Fathers warned against a standing national army, yet that is exactly what we have now.

The religious connection is also present: “the link between kleptocracy and violent religious extremism wasn’t just an Afghanistan thing. It was (is – my italics) a global phenomenon.”

And the visibility of corruption stimulates an inevitable response: “the visible daily contrast between ordinary people’s privations and the ostentatious display of lavish wealth corruptly siphoned off by ruling cliques from what was broadly understood to be public resources.”

But Ms. Chayes’ suggested “remedies,” at the conclusion of her polemic, fall short.

Charters, laws, and an independent judiciary, all of which may have worked in the past, can be co-opted “by some tight-knit network, intent on its own enrichment.”

She lists 10 “tools” we can use (anti-corruption policies, independent regimes for dispensing funds abroad, new laws, cost-benefit analyses, cautious military aid, and flat refusals to pay bribes overseas), but too many of these have already proven susceptible to gaming.

The best, I think, continues to be complete transparency: the access of an independent press and an open Internet. In the end transparency may be our best tool to “forestall extremism that is born of desperation,” a desperation and frustration at the corruption, which is a part of our human nature.