The warmth of the sun was reflected in the smiling faces all around as more than 100 people of all ages gathered to celebrate the official opening of the Cross Lane Playground last Thursday.

The playground was the dream child of a small but dedicated group of, primarily, women, who had worked tirelessly for several years to make the universally-accessible playground a reality.  Calling their committee the “Lyme-Old Lyme Love Your Playground” group, they were all members of the Lyme-Old Lyme Junior Women’s Club (LOLJWC), which supported them throughout the project. 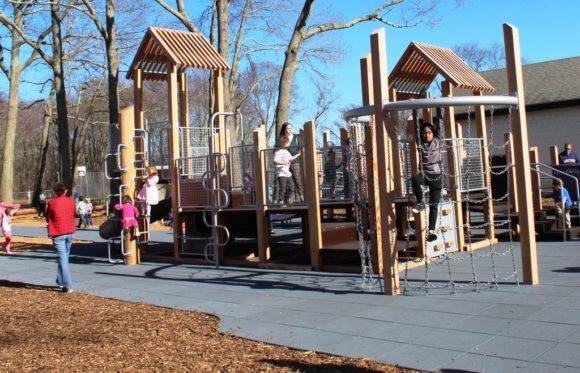 The finished playground, which comprises various features making it accessible to physically challenged children, is set upon a rubber tile surface offering additional safety to all.  It also includes a see-saw, slides, climbing bars, rope ladders and swings.  A fence and plantings are planned later in the year.  The total cost of the playground was $200,000, $50,000 of which was raised by the LOLJWC and the remainder given by the Town.

After cutting the ceremonial ribbon, ‘Love Your Playground’ Chairman Anna Reiter thanked everyone — “our sponsors and the community” — for coming. Then in words that vastly understated the enormous effort that had gone into the creation of the playground, she summed up the process the group had followed as simply, “We dreamed it up … and we got it done.”

She singled out Old Lyme resident David Catalano, who was not only the playground equipment sales manager for Columbia Cascade Company (the company that supplied the equipment) but also had served on the committee, for special thanks.  Reiter noted he had not only been primarily responsible for “putting the playground in,” but also had “put up with us changing our minds … regularly.”

An effusive Old Lyme Parks and Recreation Commission Chairman Bob Dunn spoke next, expressing his deep appreciation to all the members of the Playground Committee, and saying, “I’m so proud to see a group of people with an idea about something long overdue making it happen.”  He added, “I think your reward is all the smiles on the faces of all the children and parents here.”

First Selectwoman Bonnie Reemsnyder offered, “Special thanks to the Junior Women who started the whole thing. They came to the town a couple of years ago and really have done all the heavy lifting.”  She noted, “What you see here today is what they’ve done — it’s a demonstration of what can happen when a community works together,” and then commented to laughter, “Plus they stayed within budget.”

Reemsnyder also gave special praise to Catalano commenting, “He worked so hard,” and declaring, “This wouldn’t have happened without him.”  In the same breath, she added sincere thanks to Reiter, who had spearheaded the project from its inception. 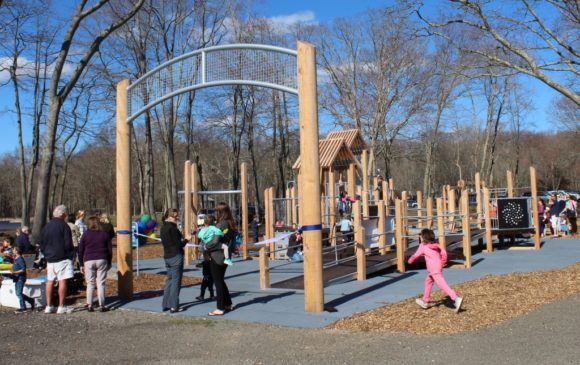