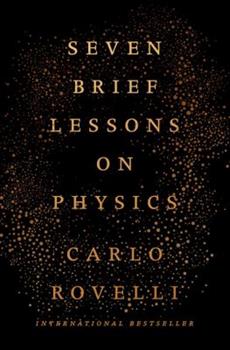 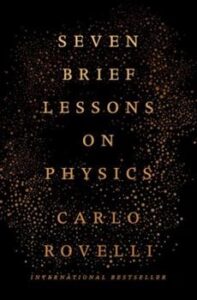 Is it really possible to describe the mysteries of physics in 81 pages?

Richard Feynman tried it in the 140 pages of Six Easy Pieces, published in 1994, but some afterwards described it as “Six Difficult Pieces.” Carlo Rovelli, the Italian theoretical physicist, has raised the ante. His work is a jewel of both brevity and clarity, especially to my curious mind that barely made it through Physics I at college.

The seven lessons begin with Einstein and the Theory of Relativity. Much has been written and expressed about this work, but Rovelli’s 11 pages are a precise summary. And he reminds us that, like Einstein, we “… don’t get anywhere by not ‘wasting’ time.”

That reminds me of the 1957 lesson offered by Robert Paul Smith’s famous Where Did You Go? Out. What Did You Do? Nothing:” exploration and curiosity are essential to progress.

Rovelli then discusses quantum mechanics and the questions of Bohr, Planck, and Heisenberg, all summarized by the phrase “And to the very last, doubt.” And uncertainty.

From the “microcosm of elementary particles” he then moves to the cosmos, the “macrocosmic structure of the universe.” Our Sun is an, “… infinitesimal speck in a vast cloud of one hundred billion stars – our Galaxy” and our Galaxy is, “… itself a speck of dust in a huge cloud of galaxies.”

Back then to the smallest particles, including the unseen but acknowledged varieties of quarks and the confirmation of the Higgs boson.

Then Rovelli moves to the “swarming cloud of probability: quantum gravity. He acknowledges that we know more now than we did 50 years ago, “so we should be quite satisfied. But we are not.” Forever the curious species, our “ … science becomes even more beautiful – incandescent in the forge of nascent ideas, of intuitions, of attempts. Of roads taken and then abandoned, of enthusiasms. In the effort to imagine what has not yet been imagined.”

The seventh lesson concerns Black Holes. We live, we think, in a world of “sheer chance,” in which “probability is the heart of physics … I may not know something with certainty, but I can assign a lesser or greater degree of probability to something.”

And Black Swans, too? How many “dimensions” really exist?

Dr. Rovelli wraps up this engaging and challenging set of lessons with – what else? – more questions. “What are we?” and should not we be aware, “… that we can always be wrong, and therefore ready at any moment to change direction if a new track appears?”

“We live in “inextricable complexity,” and this means, “… we are a species that is naturally moved by curiosity … ”

Rovelli’s brief synopsis of what we think we know about the physical world and universe challenges us to renew our study and our search.

That conclusion reinforces the haiku I wrote for myself many years ago (with apologies to Robert Frost):

Pause for a moment:
Doubt, then curiosity,
Try another path.