Corporate Disney has tossed away creative Disney’s masterpiece ending of Toy Story 3 and continued the series in a shameless attempt to rake in even higher profits.

The third installment presented us with one of the most beautiful endings in movie history, in which grown-up Andy hands his boyhood toys to the next generation of children, and tearfully waves goodbye to his favorite, Woody, who mutters “So long, partner.” Anybody watching the third film could tell this was the perfect way to end a series revolving around some of the most lovable characters in cinema. Because of this, many of us were scratching our heads when we learned that Pixar would be producing a fourth installment of the series.

As the years have gone by, I have had the ability to reflect on the world of Woody, Buzz, Slink, Jessie, and the Potato Heads and realized that all feature films, and even short films, revolve around the same plot formula: a toy goes missing, and the others must embark on a journey to bring it back. One could imagine my disappointment upon screening the trailer for the first time and observing that the plot remains the same for every film.

In the fourth part of this potentially endless series, Bonnie, their new owner, is off to Kindergarten, and Woody sneaks into her backpack and uses subtlety to help her create a new toy from the trash bin: Forky (Tony Hale of Veep and Arrested Development … to be honest, I’m always disappointed to see his characters with an in-tact left hand.) But Forky jovially identifies as trash and is always looking to return to the nearest garbage bin, much to the chagrin of Woody, who seems to be looking for something to fill his time as he is being played with less and less. 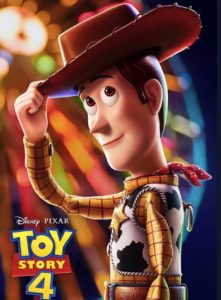 On a family road trip, Forky escapes and Woody dutifully goes to retrieve him, but on the way back runs into Bo Peep, who now lives an adventurous lifestyle as a “lost” toy near an antique store and temporary carnival. I particularly got a kick out of Keegan-Michael Key and Jordan Peele’s characters, Ducky and Bunny (aptly-named stuffed critters, who are prizes at the carnival), as well as the sub-plot of Buzz listening to his “inner-voice.”

Major film buffs will take pleasure in noticing one of the creepy songs that plays in the antique store where we meet our antagonist, a baby-doll named Gabby Gabby (voiced by Mad Men’s Christina Hendricks.)

The viewer will observe that identity and vocation are the dominant themes during their screening. It’s never too early to teach little children about who they are meant to be and what their purpose is in society.

But I do hold some complaints about this installment, as the conflict does not stand out as was the case in the three previous films (escaping a sadistic pre-teen boy, Woody being kidnapped by a self-centered toy collector, and being held prisoner by a disenchanted toy at a day care center). The urgency does not match what was previously presented to us viewers, which I believe was also what made Finding Dory a disappointment.