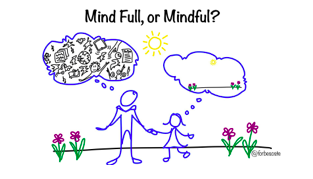 “Mindfulness” is certainly trending these days.  Books and workshops are in abundance, aimed at children, adults and families.

For some, the concept provokes rolling of the eyes, for others, curiosity, others still, an eagerness to share how helpful the practice has been for them. Perhaps in some it may provoke an urge to purchase new yoga pants and scented candles.

I believe it definitely has practical applications for healthy and happy relationships in families. Think of it as a “health habit.”

“The quality of being conscious or aware of something,” and,  “A mental state achieved by focusing awareness on the present moment, while calmly acknowledging and accepting one’s feelings, thoughts and bodily sensations, as a therapeutic technique.”

Generally, I see mindfulness as being able to identify feelings (sometimes uncomfortable ones.)  Being able to hold these feelings helps us to act — or not act — in a healthy way.

Here are some examples of mindful parenting at different developmental stages:

Mindfulness has applications across the lifespan.  Young children tend to be “in the moment,” often joyful, which is a tenet of mindfulness, but they may have trouble with handling feelings that might be perceived as less positive.  Young children can learn to “stand next to” feelings of anger, sadness, disappointment and fear, and then move on.  The elderly, sometimes looking at the past, are perhaps a bit frightened about the future.  A practice of mindfulness can be a comfort to them at their stage of growth.

Hanna Rosin, in a humorous piece in Slate, wonders if the concept of mindful parenting just identifies another way for parents to fail (e.g., I forgot to bake for the bake sale AND I forgot to be mindful with the kids yesterday.)  She raises a valid point in a funny and engaging way.  But I believe that, in the long run, a bit of this practice in family life will do the opposite; it will relieve pressure on kids and parents, and perhaps grandparents as well.