>We’re pleased to republish a column by John Guy LaPlante today — this column was originally published on Jan 1, 2013, and we thought it would be timely for readers to have a chance to enjoy it again today.

It was the strangest New Year’s Day ever … and I never expect another like it. 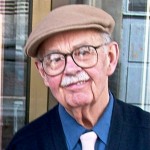 All my life, like you probably, I have celebrated New Year’s Day in winter—most often in a cold, icy, snowy winter. Not a Florida winter.

My saying this seems silly, I know, but I say it for a reason.

My seeing the New Year in, as for you, has often meant stepping outside into freezing cold air that takes my breath away and then suffering in my frigid car until the engine begins to blow in wonderful hot air.

For many decades this was always the way I experienced New Year’s Day.

With just one exception …

That exception came eight years ago when I traveled around the world for five months. Yes, nearly all of it alone—147 days, 20 countries, 36,750 miles by plane, train, and for only $83 per day, with everything included, right down to every snack and phone call and all the visas required. That trip was my present to myself for my then approaching 75th birthday.

It was a grand adventure. More than that, an odyssey. It led to my book, “Around the World at 75. Alone, Dammit!” It’s a book still selling, and in fact, one that got to be published in China in Chinese—well, Mandarin, which is the principal language.

As New Year’s Day approached, I arrived in Durban, South Africa. That’s nearly as far south in Africa as you can go, and I had come a long way, all the way from Cairo near the Mediterranean in the far north.

I arrived on Dec. 28, I think it was, just seven days after the start of winter and three days before the new year dawned. However, I had crossed the Equator to get here and in fact was far south of it.

But the seasons are opposite on the other side of the Equator. Yes, it was December, but it was not winter. Summer had just started here and it was summertime, with long daylight, short nights, shirtsleeve temperatures, even bathing suit temperatures. How remarkable. How wonderful.

Durban is a big city. An impressive city. And I was here to enjoy it . I was lucky. I was staying in a nice hostel right downtown, the Banana Backpackers. Not hotel. Hostel. I was using hostels because they were cheaper (hotels for five months can get expensive) and I got an experience more true to my purpose.

Don’t ask me why that name. I never found out. And I was making friends. And I was making the most of the city, taking in everything I could—its bustling downtown, its historic and tourist attractions, its museums. It’s all in my book.

New Year’s Day was a great celebration here, too. It’s a big day all over the world. I read everything I could in the big Durban daily about activities coming up. English is the official language. There would be all the usual merry-making. I was looking forward to it. Planned to enjoy it as much as I could.

New Year’s Day rose, bright and sunny and warm and beautiful. But none of my senses told me that this was New Year’s Day. This was so dramatically different. But my brain did.

Durban is right on the Indian Ocean, just north of where the Indian and Atlantic Oceans merge below Capetown. Durban has great beaches. I had not glimpsed them yet, but I knew they were gorgeous. I intended to get to them today. They were not far, at the end of a broad avenue that nosed right into them. A cinch. I could get to them in just a few blocks.

But imagine my surprise. My stupefaction. Thousands of people were planning to do the same thing. I noticed that the minute I stepped out of Banana Backpackers. People jammed the street, walking in from various directions.

So many. Amazing. The boulevard was closed to vehicles for the day. People were heading south on it in a broad torrent. They took up the whole width of the street. All going the same way, toward the salt water. Some on bikes but most hoofing it. Carrying all the usual stuff—towels, picnic baskets, folding chairs, parasols, toys. Many with children in hand.

Instantly I saw they were all black. Durban is a typical South African city. It has the usual mix of blacks and whites, but the blacks were there first and predominate. In fact, apartheid had been the law of the land until quite recently. Apartheid mandated the enforced separation of the races, the same as in many places in our U.S.A. when I was young, but even more severely, I’ve read.

Right away I saw this was a black crowd. I could not see any whites. Of course, white people like nice, warm, sunny, summer beaches, too. Why this river of people was all black, I don’t know. And I didn’t find out. I still don’t know. But right away I decided, this is just too much. No way can I walk with them.

I gulped hard. I was so disappointed. But then I braced up. A main reason for this big and crazy adventure of mine–I knew some thought this–was to visit other countries, and the more different the better. I wanted to see what they were really like. I was deliberately staying clear of the heavy tourist areas. I wanted to see the real people in their real everyday life. So how could I chicken out now?

Uptight I was, but I stepped forward and slipped in among them. I saw dark eyes studying me but I looked straight ahead and walked on. I was uncomfortable. Nervous. Apprehensive. I admit it and am embarrassed to say so. I was tempted to drop out and head back to Banana Backpackers. What I was experiencing, of course, was plain, classic culture shock.

My head was battling with my emotions. My head was telling me that 99 percent of these people were good, fine, no-problem people. I knew that this was true of people all over the world. Yellow, brown, red, black, white, mixed. In every country the bad ones—the malicious ones—are a tiny minority. True, too, in our U.S.A.

The only thing these folks had in mind was getting to the beach for a fine New Year’s outing.

My heart made me fearful, insecure, borderline panicky. But I walked on. I was feeling this way because they were so many and they were all black and I wasn’t used to this and there was no other white person around. But on I went.

I wasn’t going to the beach to sun myself or swim. I did like these things back home. I was going because I wanted to see the Indian Ocean and smell the sea air and be part of the festivities and observe everything going on and get some exercise and see what a New Year’s Day was like in this country and how folks enjoyed it.

We got to the beach. A great big, broad stretch of sand. The Indian Ocean stretched out ahead, clear to the horizon, with not even a tiny island in between. A few pleasure boats, yes.

But know what? The Indian Ocean didn’t look a bit different than many other stretches of salt water I have gotten to see. The only reason I knew that this was the Indian Ocean was because I was told it was, period.

What I noticed was the great numbers of people. Right away I thought of Coney Island. Who isn’t familiar with Coney Island? I’ve never been to Coney Island. But I’ve seen the photos of the packed crowds on the Fourth of July.

For sure this huge turn-out would rival Coney Island in the Guinness Book of World Records. And of course all these people were black. But they were behaving just like white people would.

I became more relaxed. I began walking around. I roamed the beach. I made my way between all these people. Families in tight clusters. Kids frolicking and romping and tossing balls. Couples making out. People reading, snacking, applying suntan lotion, snoozing.

Not easy to walk in that loose sand. I made my way down close to the beach and walked along the shore on the packed sand, moist from the outgoing tide. Some people were in the water, swimming, splashing, floating, but quite few. Which is typical on any beach anywhere.

I walked a long way to the left, then a long way back and to the right. Some people looked at me and followed me with their eyes. Most people were too busy. I had my camera and I began sneaking pictures. I learned long ago it was not smart at times to face whoever I wanted to photograph and snap a picture.

I had developed a different way. I would spot someone I wanted to focus on. Then I would turn 90 degrees and face in this new direction. But slowly I would turn my camera back 90 degrees. Very stealthily, all while gazing straight ahead. And click the shutter. Sometimes I missed the shot. But often I got the good candid shot I hoped for. Rarely did anybody catch on.

Now I got bolder. I even walked up to some people. Made sure I smiled. And asked if I could take their picture. Nobody said no.

It was all pleasant. I was happy to be part of this. But this was a film camera. And of course my roll of film got used up.

In all this, I did not come upon another white person. How come? Maybe this was a traditionally black beach. Maybe there was a traditional white beach elsewhere. But I thought of this much later.

Satisfied and content, I walked back to the Banana Backpackers. I quit long before the others did. There were just a few of us heading back. I was happy I had not caved in to my apprehensions and had had what turned out to be a most pleasant experience.

Back at the hostel, I found practically nobody around. That evening I ran into a couple of people and mentioned what I had done. But they were foreign tourists, too. They were interested. But they had nothing to say that enlightened me.

Later I had another thought. It was about black people in the U.S.A. Men and women of all ages born there and grown up there. Like me. Just as much an American citizen as I.

And I thought of the many times when for sure they must find themselves alone among whites. At times they must feel as alone and isolated and apprehensive as I on this New Year’s Day. This is probably a common experience for them in our section of Connecticut where blacks are still a small minority, although the situation is changing a bit. And surely they get used to it, adapt to it, and develop a certain comfort.

I felt these disturbing emotions just for a few hours on just one day. I’m sure some of our blacks back home must feel it frequently, on and on, all their lives.

That New Year’s Day in Durban made me more understanding. More sympathetic. I learned a powerful lesson. And the lesson has stuck. We’re all much alike. Little reason to be nervous among strange.

I’d like to include some of the photos I took that day but they’re not at hand. Sorry.

Happy New Year to you, one and all!