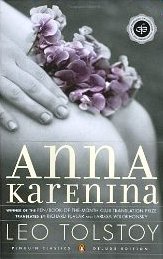 First off, sorry to anyone who was excited for a word from my dear mother, but she is a bit preoccupied at the moment, so I’ll be doing the review this week. Some of you might remember me from our joint review of Hamlet (in which, to be frank, I wrote terribly.) but enough about me, let’s get to the book.

In a letter to a friend, Tolstoy wrote of Anna Karenina, stating that it would be his only ‘great novel’. And he was correct on it being great (but maybe not his only great novel, because I can’t imagine anyone would want to endure all 1,225 pages of War and Peace if it were dreadful.)

Our (sort-of) heroine, Anna Karenina, has seemingly everything she could want — beauty, money, social position, and a loving son. But then she cheats on her husband (who, by the way, is a total jerk) with the young officer Count Vronsky. This, to put it bluntly, ruins her entire life.

However, among the gloom and doom of Anna’s story, there is the love story between Kitty (another poor girl lured in by Vronsky) and Levin (Anna’s brother’s friend). If you can catch it, there is a great event of foreshadowing regarding our poor Anna’s fate, when Vronsky and Anna’s brother, Stepen, go to the train station to meet Anna and Countess Vronsky.

So, this book was a little depressing, but that’s the nineteenth-century Russians for you. It was beautifully written, although some translations are a bit musty (but if you speak Russian, you’re home free).