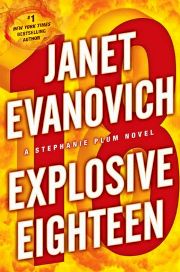 Can you believe I have written almost 100 of these little buggers ( I mean, jewels)? You poor people. What have I put you through. Take note that the rest of my family * is in the paper this week too, so maybe I am not a total failure.

I have read so many things lately that its really is hard to choose which to write about. Hollis was reading Dante while I was reading Diane Mott Davidson, so that,s not good. Then I have the last Flavia DeLuce book, but I can’t bring myself to read it because I don’t want to finish it. Dilemma, dilemma. That leaves me with the newest installment of the Stephanie Plum books by Janet Ivanovich, which I think I must do because the movie of the first book comes out on Friday.

Janet Evanovich has really done well with Stephanie Plum. And vice-versa I haven’t reviewed one since June of 2009, but that does not mean I haven’t read and loved them all. “Explosive Eighteen” may not be Kafka, but why do we need to read smart stuff all the time? Who says humor and great fun aren’t smart? Reading is about entertainment too. What are we supposed to read? Textbooks?

Once again, Stephanie Plum, bounty hunter and native Jersey girl extraordinaire is kicking butt. And having the favor returned. I would seriously cry in the half the situations that don’t faze her. At the end of the 17th book, she took a little trip to Hawaii with some “ play money” and a guy.

We don’t know which guy.

Was it smoking hot Ranger – silent AND deadly or Morelli — the sexy cop? She loves them both and is going to have to decide eventually, but can’t. I’d pick Ranger if you want to know. Also Edward. Im sure that is wondrously interesting to you and you’ve lost sleep debating ( actually I’m a Gage girl – he’s my “go-to-guy” as you now know…)

So … Stephanie returns from Hawaii alone. What happened? I know, but wont say.

They are an excellent background to the real trouble. Stephanie sat next to someone on her return trip, who was killed on their layover in L.A. He accidentally put something in her bag that every single FBI agent and ne’er do well thug on the east coast wants.

She, of course, doesn’t have it.

They don’t believe her, so she’s stalked, pummeled and annoyed. What else is new?

The real joy of these books is the fast-moving plot, the humor, Lula’s outfits and their readability. It’s like candy. You know it’s going to be great. You anticipate it and Evanovich never lets you down.