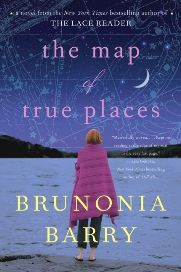 April 1, 2008, I reviewed the stand out self published book by Brunonia Barry.  I swooned.  Read it, so I don’t have to repeat myself- we all know how anathema THAT is to me. (Boyfriend will hurt self rolling eyes.)

With very high expectations I read her second book — The Map of True Places.  At first I was not enthralled. I hoped for more and put it down and picked it up a few times.  Luckily I picked it up that last time.  Phew.  Pity the unbeliever.  I literally finished and slammed it closed saying Holy Crap –.  I had to re-read the last chapter to orient myself.

This is what I love about Brunonia Barry.  You  think  you know better (again with the eye rolling) but  you don’t.  As with Muriel Barbery’s Elegance of the Hedgehog (9.4.09) you have to keep checking.  You are close and its in your periphery but you miss it.  I love being put in my place.  I love being wrong.*

Barry keeps you on the verge of figuring it out.  When she tells you can’t believe you missed it.  You are glad you missed it because the mystery is her talent.

Zee Finch is a therapist in Boston with a lovely office overlooking the Charles.  She grew up in Salem and spent an excellent portion of her childhood being a boat-thieving derelict.  Alas, morally she is sound so that ended before it could have made an equally enthralling story.  Her young bipolar mother marries a gay man and kills herself when her daughter is 13.  The father’s love, a wonderful man named Charles, moves in and it is hardly a fait accomplit.

Zee challenges her own demons by addressing those of others and thwarts her own progress.  When a case strikes very close to home and ends without resolution, Zee is forced to confront the obvious and come to terms with herself.  As with the Whitneys in The Lace Reader, the Finches are a fabulous amalgamation of drama and love.  The more you know the less you understand until the denouement, which has dreadful yet cathartic repercussions.

*There are a veritable plethora of reasons this is not true, but you know what point I’m making. Yes, you do.