After the quick turnover to the Dallas wedding (flew there at 6 a.m. Saturday and was home by Monday, mid-afternoon), I unpacked, played with the cats, watched a DVR’d Connecticut Sun game) and finished a book, then slept until 7:30 Tuesday.

Then I drove to Madison and took friends to pick up their new car in Westchester County, NY.

Eric drove the new car home (the next morning he drove to Montreal to pick up their son from college), Lisa and I stopped at Trader Joe’s in Milford to do some quick food shopping, but realized we could not both go because Lucy the dog was with us.

Since I really needed nothing (I’d gotten my Trader Joe’s fix the week before), I read in the air- conditioned car and played with Lucy. About 20 minutes later, Lisa arrived with a cart filled with goodies, giving me some frozen shrimp and her favorite goat cheese.

It was as good the night I made it as it was twice more as leftovers. 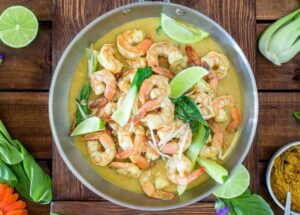 Remove zest from lime in wide strips with a vegetable peeler, cut lime in half and set aside. Bring zest, garlic, coconut milk and fish sauce to a simmer in a large skillet over medium heat. Arrange shrimp in a single layer and cook, maintaining a bare simmer, until opaque, about 3 minutes. Using a slotted spoon, transfer shrimp t a large shallow bowl and let cool.

Increase heat to high; cook coconut until thick and pourable (similar to the consistency of runny honey), about 5 minutes; remove from heat. Remove and discard lime zest and any shrimpy bits. Season coconut sauce with kosher salt and pepper and let cool in pan.

Squeeze juice from reserved lime half over shrimp and spoon coconut sauce over. Top with onion, jalapeno, tomatoes and cilantro. Squeeze remaining lime over. Drizzle with oil, then top with tortilla chips and sprinkle with sea salt.

Do ahead: Shrimp can be cooked and coconut sauce can be made 1 day ahead. Transfer to separate airtight container; cover and chill.