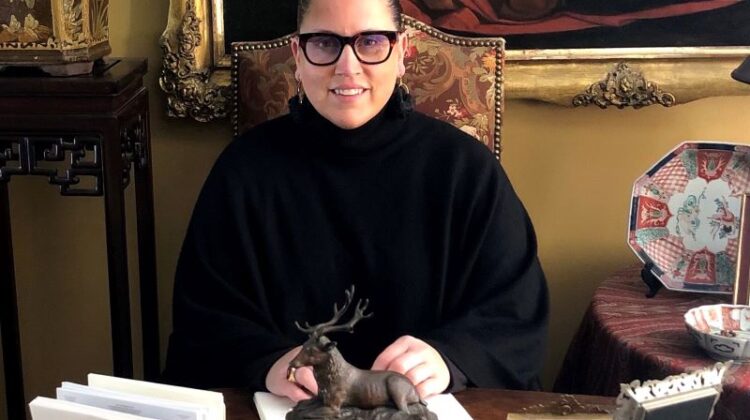 OLD LYME — Mora Rowe, who currently serves as the Lyme Academy of Fine Arts Executive Director, has announced her intention to step down from the position this month. Consequently, the Academy has launched a search for a Managing Director to oversee the Academy’s finances, facilities, and operations on its nine-acre campus in Old Lyme, C0nn.

Rowe contributed to planning the reopening of the Academy in fall 2021. She initiated necessary upgrades to the facilities, hired administrative staff, secured numerous grants for the organization, re-engaged with the Lyme/Old Lyme community, and planned several events on campus.

Rowe’s efforts supported the work of the Co-Artistic Directors, Jordan Sokol and Amaya Gurpide, to revive Lyme Academy’s mission to teach the foundational skills of drawing, painting, and sculpture in the figurative tradition.

Most recently, Rowe is credited with the design and merchandising of de Gerenday’s Fine Art Materials and Curiosities, which opened on the Academy’s campus at the end of June.

“I am grateful to have been a part of the relaunch of this storied Academy,” Rowe comments, “and to have worked alongside supportive and dedicated staff, the board of trustees, and community members. I feel confident that Lyme Academy is in a strong position to move forward into a bright and promising future.” Rowe will wrap up her tenure at Lyme Academy in September. Along with her departure, the title Executive Director will be retired.

With Rowe’s resignation, the board of trustees voted to establish the new role of Managing Director, and to begin an immediate search for a person who will be responsible for the overall operations of the Academy and support the work of the Artistic Directors, Sokol and Gurpide, as they expand the artistic offerings at Lyme Academy.

“The Board of Trustees evaluated other arts organizations to determine the best leadership structure for Lyme Academy,” adds Michael Duffy, Lyme Academy Board Chairman.

He continued, “The Managing Director title is one you see at places like the Goodspeed Opera, the Ivoryton Playhouse, and elsewhere, particularly when the role is partnered with an Artistic Director. Moving forward, the Academy’s Artistic Directors, the husband-and wife team of Jordan Sokol and Amaya Gurpide, will report directly to the board alongside a Managing Director who, once hired, would be expected to start sometime this fall.”

The search for Managing Director is launching at the same time as many new artistic and educational offerings at the Lyme Academy of Fine Arts. In August, the Academy announced a new Youth Program, directed by Old Lyme-native Rick Lacey, which begins in early September.

New classes, workshops, and an all-level Studio Immersion Program are planned to begin in October, along with the much-anticipated return of the full-time Core Program students.

Those interested in learning more about the position, or who wish to apply, are invited to visit the DRG website (drgtalent.com) or to contact Hansen directly at lhansen@drgtalent.com. The Academy expects to begin reviewing applications in October, with a hire in late fall 2022.

Editor’s Notes: i) This article is based on a press release issued by Lyme Academy.

ii) The mission of the Lyme Academy of Fine Arts is to teach the foundational skills of drawing, painting, and sculpture in the figurative tradition. By its commitment to training students in these skills and an engagement with contemporary discourse, the Academy will empower a new generation of artists. Through its programs, the Academy is committed to enriching the cultural life of the community. As an extension of programming, the Academy has recently announced the opening of de Gerenday’s Fine Art Materials and Curiosities, a new shop offering art supplies and giftable objects from around the globe.