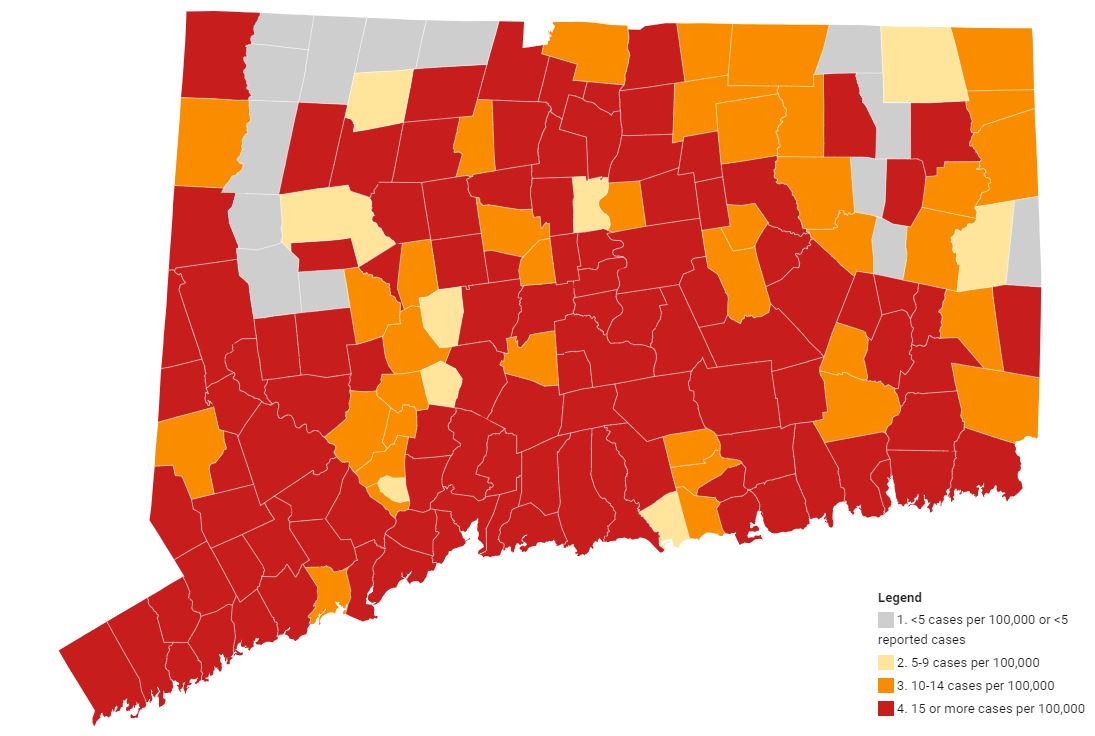 On Thursday, April 21, the Connecticut Department of Public Health (CT DPH) released its latest weekly COVID-19 Alert Map (pictured above), which indicates that 108 municipalities are now in the Red (highest of four) Zone for case rates. These towns in the Red Zone include both Lyme and Old Lyme.

As of April 21, 2022 eight out of the nine towns in the Ledge Light Health District (LLHD) are in the Red Zone, with North Stonington being in the Orange (second highest) Zone.

No towns are in the Yellow (second from lowest) or Gray (lowest) Zones.

The LLHD is no longer issuing reports with updated Case Rates and other metrics.

The CT DPH will issue an updated map of the zones Thursday, April 28 — the map is updated weekly on Thursdays.

The color-coded zones are:

April 5, 2022 was the most recent day on which no new cases were reported in either town.

Prior to March 25, Lyme had gone for 23 consecutive days with no new cases being reported. Two new cases were reported in Lyme on March 25.

On April 21, the number of COVID-related hospitalizations increased to 176 from 165 on April 20.

Of those hospitalized on April 21, the number not fully vaccinated was 58 (representing 32.95%).

The next Daily Data Report will be issued by CT DPH Friday, April 22, around 4 p.m.

Increase in Cases in Lyme & Old Lyme Since August 2021

The cumulative total of confirmed cases for Old Lyme has now increased by 642 since Wednesday, Nov. 10, when the total stood at 443 — that number had stood unchanged for a week since the previous Thursday, Nov. 4.

On Aug. 26 — which was the day Lyme-Old Lyme Schools started the new academic year — Old Lyme’s cumulative case total stood at 372, meaning there have now been 713 new cases there since that date.

Meanwhile, Lyme’s cumulative total on Aug. 26 was 114 indicating 154 new cases have also been confirmed there during the same period.

The LLHD is no longer issuing weekly updates unless there is, “any significant change in case rates, hospitalizations, etc.”

On April 14, LLHD sent LymeLine.com this press release issued by CT DPH the same day. It begins: With the current uptick of COVID-19 cases—coupled with the upcoming schedule of spring holidays and family gatherings—the Connecticut Department of Public Health is reminding residents of the tools currently in place to help contain the spread of the virus.

LLHD continues to focus its vaccination efforts on homebound populations and providing initial vaccinations and boosters to individuals who were vaccinated previously. Information about vaccination opportunities can be found at https://llhd.org/coronavirus-covid-19-situation/covid-19-vaccine/.”

An explanation of the new CDC Community Levels tool by Thomas Gotowka can be found at this link.

Fatalities Due to COVID-19 in Lyme, Old Lyme

There has been one COVID-related fatality of a Lyme resident: a 57-year-old male passed away Nov. 16, 2021. On Nov. 30, the state finally included this fatality in its data

Four COVID-related fatalities have now been reported in Old Lyme. The first two fatalities from Old Lyme, which were reported in 2020, were a 61-year-old female and an 82-year-old male.

Details of the third and fourth fatalities, which were reported respectively in 2021 and on Feb. 4, 2022, have not been made available.

Under new state protocols for schools, Lyme-Old Lyme (LOL) Schools are no longer required to carry out contact tracing.

LOL Schools Superintendent Ian Neviaser explained the latest developments in LOL Schools COVID protocols in an April 1 email to the school community, saying, “As noted in my email of February 17, 2022, beginning April 1, 2022 we will no longer report daily COVID-19 cases in the schools.”

He then stated, “For the remainder of this school year, that information will be complied on a weekly basis and will be available on our website at the following link: https://www.region18.org/parents/covid-data.”