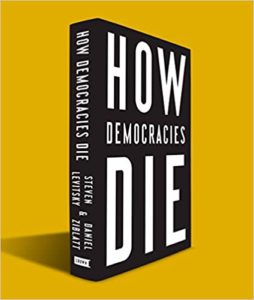 Two learned Harvard professors open this provocative challenge to many of our conventional beliefs with a brief sentence: “We feel dread  …” Their worry – that “democracy” as we have known it may be seriously threatened: “Democracies may die at the hands not of generals but of elected leaders … who subvert the very process that brought them to power.”

They cite Hitler, Chavez, Castro, Putin, and Erdogan, among past and current elected leaders who trashed democracy, even when some of them retained popular support.

These professors define it as “a system of government with regular free and fair elections, in which all adult citizens have the right to vote and possess basic civil liberties such as freedom of speech and association.”

But, given the enormous explosion of human population and the way social media can manipulate many of us, are the precepts of democracy and our “Madisonian system of checks and balances,” still workable?

Our system in this country seems to be based on a desired but frequently non-existent “balance” among executive, legislative, and judicial branches of government, at local, state, and national levels

They continually pose difficult questions in this book:

There seem to be two critical norms for the continuation of “democracy”: the first is institutional forbearance (don’t try to control and manage everything) and natural toleration (respecting the opinions and habits of other others), but far too often religious beliefs and ethnic habits tend to corrupt our political universe. 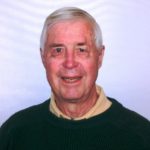 About the Author: Felix Kloman is a sailor, rower, husband, father, grandfather, retired management consultant and, above all, a curious reader and writer. He’s explored how we as human beings and organizations respond to ever-present uncertainty in two books, ‘Mumpsimus Revisited’ (2005) and ‘The Fantods of Risk’ (2008). A 20-year resident of Lyme, he now writes book reviews, mostly of non-fiction, a subject which explores our minds, our behavior, our politics and our history. But he does throw in a novel here and there.
For more than 50 years, he’s put together the 17 syllables that comprise haiku, the traditional Japanese poetry, and now serves as the self-appointed “poet laureate” of Ashlawn Farm Coffee, where he may be seen on Friday mornings. His late wife, Ann, was also a writer, but of mystery novels, all of which begin in a village in mid-coast Maine, strangely reminiscent of the town she and her husband visited every summer.