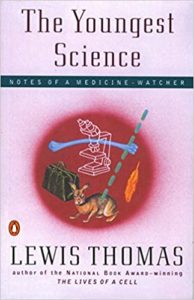 There is nothing quite like reading about the advances in medicine in the middle of a pandemic, especially when those advances were first reported to me some 37 years ago.

Lewis Thomas wrote his fluid, literate, and candid autobiography back in 1983, when I first read it. It is his personal story of curiosity, experimentation, failures, and successes. He confirms how much we humans have learned about ourselves … and yet how little we really know.

He describes how medicine has evolved from a doctor holding your hand, prescribing placebos, and murmuring assurances (almost religious rituals) to the start (only a start) of understanding how we tick.

Back in that distant past (before World War II, medicine was “ … bleeding, cupping, violent purging, the raising of blisters by vesicant ointments, the immersion of the body in either ice water or intolerably hot water, endless lists of botanized extracts cooked up and mixed together under the influence of nothing more than pure whim, and all these things were drilled into the heads of medical students …”

Have we improved? Yes, argues the good doctor!

In the past, “ … medicine, for all its façade as a learned profession, was in real life a profoundly ignorant occupation.” Dr. Thomas does suggest that we have actually made progress toward “a genuine science”. Yet even though in the years from the 1940s to the 1980s, we have seen the “mechanization of scientific medicine” with its pluses and minuses, “talking with patients remains a critical element.”

Dr. Thomas goes on: “In real life research is dependent on the human capacity for making predictions that are wrong, and on the even more human gift for bouncing back to try again.  Predictions …  are pure guesses. Error is the mode.”

He also confirms an experiment that I tried some years back. “Sabbaticals are designed not for resting but for getting into new ground for a while.” I took my family to rural England for four months in 1978 and to Australia and New Zealand in 1988, writing both periods. Expansions of understanding …

In almost every chapter, the doctor offers challenging insights.

On latent ignorance: “I am as much in the dark as ever.”

On the role of women in family education: “I believe that this is something that women are better at than men.”

On our ability to work together: “It seems to me that there are solid biological advantages in behavior that result in cooperation and collaboration.” He calls this his “Panglossian bias.”

The author’s conclusion: “ … we are, to begin with, the most improbable of all the earth’s creatures, and maybe it is not without hope that we are also endowed with improbable luck.”

Lewis Thomas died in 1993 but I do heartily recommend any and all of his writings, including The Lives of a Cell, The Medusa and the Snail, The Fragile Species, Et Cetera, Et Cetera, and his best title of all, Late Nights Thoughts While Listening to Mahler’s Third Symphony.

What is a pandemic when we have Lewis Thomas to entrance our minds?

Editor’s Note: ‘The Youngest Science: Notes of a Medicine Watcher,’ by Lewis Thomas was published by Viking Press, New York, in 1983. 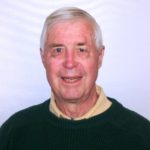