If I were to inquire among the public what they consider to be one of the scariest films ever made, I would hear countless familiar titles: The Exorcist, Alien, Jaws, The Shining, The Silence of the Lambs … each one terrifying in its own manner.

But there is one horror film that will linger in the viewer’s mind well after completing it, and it lacks a reputation akin to the films I listed above, which it truly deserves.

This movie is 1980’s The Changeling. I discovered it many Octobers ago when I was seeking a list of new scares for Halloween season and came across a list of scariest horror movies compiled by Martin Scorsese, who listed it as among his top 11 terrifying movies. To my luck, I found that it was easily accessible on YouTube in its entirety.

And to my surprise, it was the first movie to scare me in years. I had watched countless horror flicks as a teenager and college student, but I was always unfazed, as I was aware they were simply movies. This brought me back into the world of genuinely believing whatever I saw before me, as if it were happening to me.

George C. Scott stars as John Russell, a composer who relocates across the country for an academic career after his wife and daughter are killed in a road accident. Needing a place to live, he is hooked up with a home by the local historic society that once belonged to an influential local family. Upon moving in, Russell is harassed by the poltergeist of a young child, who seeks justice from beyond the grave.

The Changeling can be summarized in one word: creepy.

The supernatural root comes from the ghost of a child, who perished during the Progressive Era of our nation’s history, which, in my opinion, is the creepiest timespan in our history. Just looking at the black-and-white portraits that depict people not smiling (as early cameras took greater lengths of time to take pictures, try holding a smile for nearly a minute), in addition to the fashion that was in style back then. This goes on top of taking child-friendly themes that tend to border on creepiness to begin with.

It is perfect fertility for a ghost story.

Its horror is unique compared the movies I listed in the beginning of this essay, which tap into our fight-or-flight instincts (likely flight for most of us). The fear in those films is driven by survival instincts, whereas this film involves cooperation with a being that we cannot see.

Val Lewton pioneered the idea in filmmaking that it is not what we see that scares us, but what what we cannot see, and we are constantly terrified following an occurrence that we experience every day that was caused by something from the great beyond.

There is a sense of mystery, as Russell seeks to uncover the identity of the ghost and why it is haunting him, which leads him on an investigative trail that uncovers a scandal that had been buried for decades, which blends the feel of films akin to All the President’s Men, Spotlight, and Erin Brockovich.

Here is the YouTube link to the movie and I implore every reader to watch it when they have a chance during the remaining two weeks of October. You will not be disappointed. Trust me. It even has the approval of Stephen King, and that should be the ultimate authority! 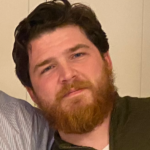 Kevin Ganey is ‘The Movie Man.’

About the Author: Though no longer a resident of Lyme, Kevin knows he can never sever his roots to the tree of his identity. When not attending to his job in Boston, he is committed to ensuring a better grasp of current (and past) releases of cinema to his home community as he strives to leave his own mark in the same field that has always been his guide to understanding life. If you enjoy his published reviews here on LymeLine.com, follow him on his new website at ‘The City of Cinema‘ and read more of his unique insights into entertainment.