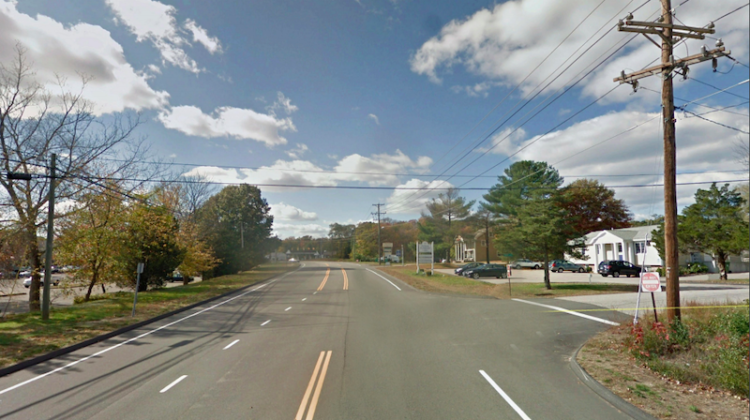 Editor’s Note: We felt it would be helpful to our readers to provide some context to Saturday’s Open House on the future of Halls Road and the important discussions it involves about the future of Old Lyme. While we were working on an article, Mark Terwilliger submitted his own thoughts on the project. We are publishing his piece here and will now publish our own later in the week.  In the interests of full transparency, we note that Terwilliger is the partner of Halls Road Improvement Committee member Edie Twining.

What’s going on with Halls Road?

The Halls Road Improvement Committee (HRIC) is tasked with leading a town-wide discussion on the future of the Halls Road district. The ultimate goal of these discussions is the creation of a master plan that will guide future outside investments and development in that area.

How did this come about?

Some people in town were pushing for road and traffic changes to improve pedestrian / bicycle access to the shopping area on Halls Road, and asking the town to allocate money for those purposes. The town seemed amenable.

Other people said, “Wait a minute. Why should we make a non-trivial investment in this when we don’t even know what other (private or state) changes are planned, or in the offing, for this district? For that matter, we don’t even know what the town as a whole wants or needs from the future of this district.” And that began the process of looking in a more formal way at what changes we might want to see in the Halls Road district over the course of the next decade or two.

Why not just leave it alone?

Change is coming, whether we want it or not. No one can stop it. Our only choice is either to try to shape that change in the directions we want, or to let the changes happen to us without our input. The only outcome that is flatly impossible is “no change.”

The grocery stores of Old Lyme make a good example of change. In the early 20th century there were multiple grocers, meat markets, and general stores in various districts of Old Lyme. Main Street (as it was called then) had several, one of which was the A&P. The A&P was still the main grocery (and still on Lyme St.) in the 1950s. They told the town they needed to greatly expand their store and nearby parking to stay in business. Eventually the town responded by making two major adjustments.

A group of local investors raised money for a “modern” strip center along Halls Rd., and the town changed the zoning in that area to make it only suitable for such use: they zoned it for commercial use only, and required a 60 ft. set-back from the road to leave ample space for cars. When the A&P expanded further, new investors were sought and the original community investors held only a minority interest.

The A&P eventually went bankrupt, but the owners of the shopping center found a new anchor tenant in the Big Y.

Attracting and keeping businesses requires cooperation and responsiveness on the part of the town. The Big Y has a much larger store nearby in Old Saybrook and several more along the shoreline. I have no idea what the Big Y’s plans are for their smaller Old Lyme store, and anyone who is privy to that sort of information might not be at liberty to say.

What should we, as a town, hope to accomplish?

There is more to the town’s role than simply reacting to some proposed change or hustling to stave off a bad outcome. The whole object of the current process is to point to the most positive future for the Halls Road area and devise a sound set of measures to help create it.

If we (with the help of the HRIC and others) can put together a solid picture of the economic advantages of locating certain kinds of businesses in Old Lyme, and if we can demonstrate that we are in broad agreement as to what kinds of development we would like in the Halls Road area, and show that we are prepared to make the changes necessary to permit and promote that kind of development, then we have a much greater chance of attracting developers who will make the significant investments of money and time required to make our plans a reality.

All of these “ifs” will take time, effort, and involvement from many different groups and individuals. The Halls Road Improvement Committee is looking for broad-based participation, particularly in the processes leading to the creation of a master plan that can guide future developments along Halls Road.

A master plan does not create anything by fiat. The objective, rather, is to create a plan that has broad support, has a firm basis in economic realities, and offers attractive opportunities for reputable developers and current owners alike.

If we do not make this effort, if we simply leave the future shape of Halls Road to the uncoordinated, one-point decisions of each current and future property owner with no guidance from the town, we will have no room to complain when things do not go as we wish. That could happen in a big way if we do not plan ahead. Changes well beyond the control of the town or any particular business are already under way.

How have things changed?

Retail stores, particularly in strip malls and big box malls, are under severe pressure from online shopping. More than half of U.S. households are Amazon Prime members. I would guess the percentage is even higher in Old Lyme. The online-centered lifestyle has nearly killed the bookstores and wrecked retail giants.

Curiously, it has also created a new demand for what Old Lyme once had: a centralized meeting place with a mix of stores and homes, public buildings and public parks — a place where one could park the car and walk to do errands, meet friends, hear the latest, or just watch the world go by. It’s the meeting places and public life that are missing in the online-focused world.

Retailers and developers have taken notice and altered their plans accordingly. “Mixed use” is the one environment in which bricks-and-mortar retail still seems to flourish. It is a mix of residential, shopping, dining, entertainment, supermarkets, offices, and walkable public spaces that provide a place to linger and meet with friends.

When cars were the center of life, shopping required a huge parking lot. Now it takes a cell phone. More and more parking lots are half-empty or dead. It turns out you can’t have a neighborhood without actual neighbors, no matter how clever the marketing. When an area includes real, full-time residents, it feels different and alive. It isn’t just a place to run errands, but a place with a full life of its own.

People want the amenities of shops and so forth, but they also want the experience of other people around them. This is the one thing they cannot get when they are online — as they increasingly are whether at work or at leisure. Mixing residential and commercial, public and private spaces creates a more attractive environment for both businesses and residents.

Older people who have lived in Old Lyme for decades find they must move to another town if they want to downsize. Mixed use housing in the Halls Road area could be an attractive alternative for many in this situation. It would also be attractive for younger people just starting out in life. Adding new uses to the land near Halls Road will also create new sources of tax revenue, providing some relief for existing tax payers.

The zoning we created to serve the 1950s’ car culture mandates nothing but strip malls — and that may now be an economic dead end. If we want anything new or different, we will have to make the changes to support it.

We as a town are a long way from having a shared vision of what is best for Halls Road. That process will take time and active participation. The HRIC works to lead the process, to make it transparent, and to keep people informed and involved. As a part of that effort, they are hosting an Open House at Memorial Town Hall this Saturday, June 15, from 9 a.m. to 4 p.m.

I urge you to stop by for a few minutes and take a look at some of the ideas that are in discussion. The future shape of Halls Road is not a simple yes or no question. Most of us depend on the services available there, and many of us have ideas about how it could be better.

The HRIC Open House on Saturday is the latest opportunity to get involved in the discussion.