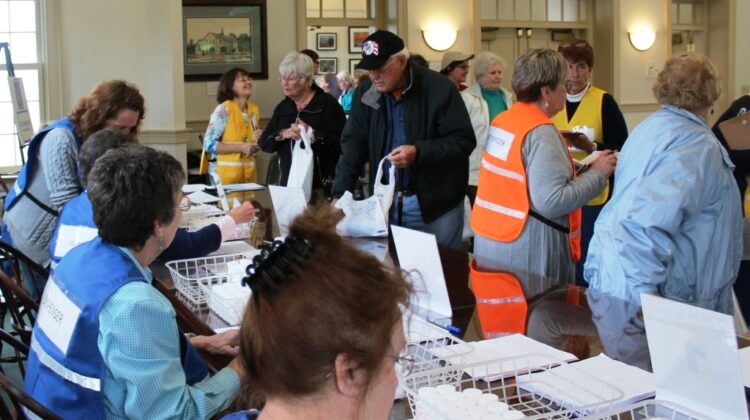 On Tuesday, June 6, Old Lyme’s Memorial Town Hall was the site of the first full-scale, mass dispensing exercise in the state. The goal of the exercise was to simulate a realistic outbreak of anthrax, one of the more likely agents to be used in the event of bioterrorism, or any other agent that might be used in such an attack. Old Lyme’s emergency preparedness made great strides through the completion of this exercise, and the Ledge Light Health District (LLHD) along with the Visiting Nurse Association were both vital contributors in the process.

The exercise was successful in that the ‘throughput’ time between someone arriving at town hall and being dispensed with the appropriate medicine was reduced from over six minutes to approximately two during the morning. Some minor hiccups in the process were identified, which, when subsequently eliminated,  enabled the process to be streamlined. Qualified evaluators kept a close eye on the practice, noting at each stage what worked and what needed improvement.

Ledge Light Operations Lead Kris Magnussen, who is an Old Lyme resident, explained that measuring the throughput was important because, “It tells you how many people you can handle in an hour.”  This, in turn, enables LLHD to be able to estimate the total number of people that can be dealt with in any specific period and to determine how many dispensing points are needed for a certain size of population.

Magnussen spoke appreciatively of the assistance LLHD had received from Old Lyme First Selectwoman Bonnie Reemsnyder in enabling the exercise to take place.  Magnussen commented, “Bonnie is a great supporter.”

The participants in the exercise were town hall employees who volunteered to assist and seniors who were attending the Lymes’ Senior Center that morning and volunteered to be driven over to town hall to participate.  This latter situation mimicked the likely situation in a real bioterrorism emergency of a group of people arriving together at the same time. Each participant was timed from their arrival in town hall through to their departure. As participants exited, they were asked a series of questions about their experience, with the aim of improving anything that could expedite or facilitate the process for them.

I decided to test the process for myself. As I walked in to the town hall, I was quickly greeted and directed to the computer and printer station. Using Dispense Assist, an online screening tool, data regarding my age, weight, gender, and medical information were documented. Upon completion, a voucher was printed out for me to give to the volunteers at the dispensing station.

Submitting this information took a few minutes, but this step can be expedited if the participant completes the form and prints the voucher before arrival. Vouchers can be found at http://www.dispenseassist.net/default.html. Once the voucher was given to the dispensing station, the volunteers quickly provided me an empty tablet container which in a real life situation would have contained the correct prescription of Doxycycline that I would need to take for the next 60 days, had I been exposed to anthrax germs.

By the time I received the medication and exited the exercise, less than five minutes had passed. Magnussen noted, “When the participants came prepared with a printed out voucher, it takes them under two minutes to receive the correct medication.”

An interesting development that transpired during the exercise was that it became clear that in the event of a real emergency, once town hall employees had received their own medication, they could then assist other arriving to navigate the process to obtain their own. Old Lyme Emergency Director David Roberge was on hand to support the exercise and said, “This is a really valuable process … we are learning a great deal.”

Residents of Old Lyme can be pleased that they now are a step up on other areas in regards to emergency preparedness. This mass dispensing exercise demonstrated to the LLHD how the town would be able to deal with a bioterrorism event, and identified which aspects of the exercise need improvement.