On June 11, members of the Old Lyme Youth and Police group known as ‘Cop Club’ highlighted their four-year-old program at the Coalition for Juvenile Justice 2015 Annual Conference in Washington DC.

Old Lyme Police Officer Martin Lane and Lyme-Old Lyme High School (LOLHS) senior Julia Strycharz were panelists during the presentation titled, “Increasing Positive Relations between Police and Youth.”  This presentation was included in the conference’s Welcome and General Session, which highlighted the importance of positive relations between police and young people.

Lane and Strycharz described the local efforts in Connecticut that bring law enforcement and youth together around jointly planned projects.

A collaborative project between the Old Lyme Police and the Lyme’s Youth Service Bureau (LYSB), was awarded $10,000 in grants administered by the Connecticut Juvenile Justice Advisory Committee in 2011, 2012 and 2013 to establish a youth and police program.  The youth programs are required to provide leadership roles for the youth and non-authoritarian roles for police officers.

Initially called ‘Operation LOL,’ LOLHS students and police collaborated in the writing of the grant.  The program has a goal of creating opportunities for youth and police to get to know each other through a series of monthly planned activities. These activities promote positive youth development, strengthen relationships between youth and police, and also help the community through a group service project.

Since being awarded the grant, youth and police have jointly planned fun monthly activities, including trips to New York City, Mount Monadnock,  a trampoline park, go-kart racing, snow tubing, bowling and an annual table tennis tournament held at LYSB.  Officer Lane said “Nothing builds friendships better than sharing ice cream together after getting beaten by the youth in a game of ping pong.”

Over 60 Lyme and Old Lyme youth have participated in ‘Cop Club’ since its inception.  The Connecticut Youth and Police grant permitted a maximum of three years funding for any one program.  Due to this, in 2014 the Town of Old Lyme decided to continue their commitment and fund this successful program.  The Old Lyme Police Union has also contributed monthly to ‘Cop Club’ for the past four years.

One of the requirements for Old Lyme Police Officers to participate in “Cop Club” was to attend a mandatory training in ‘Effective Police Interaction with Youth.’  This training provides patrol officers with information to understand youth behaviors better and provides practical strategies for interaction with young people in positive ways.

From this training, officers became better equipped to communicate effectively with young people they encountered and increased the likelihood that interactions with youth would result in positive outcomes.  Old Lyme Police Officers learned about the problem of inequitable treatment of minority and white youth in the juvenile justice system.

They discussed approaches for collaborating with youth officers and identified the benefits of taking a more supportive approach to dealing with youth.   Eventually, two thirds of the Old Lyme Police received this training and actively participated in the youth and police program.

In his remarks Officer Lane added, “Within my first year in Old Lyme, I realized that the Old Lyme Police Department had little to no involvement with the community’s youth and I began to develop this program with LYSB.  As for the experience being rewarding, the transformation of attitudes toward youth by police officers, who had previously little contact with this age group, was immediately visible.”

Strycharz commented, “I was a little nervous to be speaking to an audience of 300 people, mostly juvenile justice professionals.  I told them how our relationships and friendships are invaluable. Not only did the youth develop a new-found-opinion of the policemen of this town, but as the word spread about the club, the new attitude about the policemen also spread too.”

She continued, “The ‘Cop Club’ has changed the culture school-wide.  The youth of our town are not afraid of the policemen anymore. If they happen to be in the school, or at a sporting event, students aren’t afraid to approach them and say hello, ask them a question, or casually talk to them.” 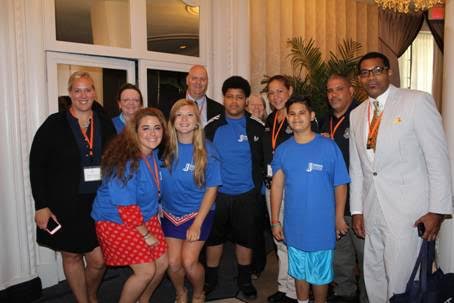 Joining Lane and Strycharz at the conference were LYSB Programs Coordinator Missy Garvin and LOLHS senior Taylor Hamparian.    Garvin said “We are very proud of the success of our program in Old Lyme and it’s an honor for us to be highlighted at this national juvenile justice conference in Washington.  LYSB and the Old Lyme Police have created a valuable partnership, which will benefit both our youth and the police in our town for years to come.”

She added enthusiastically, “I can’t wait to start planning our next group to start in the fall.”