The amazing Jen Petty Mann continues her book review journey today with her 100th review!  So this is a good time to look back on her previous 99 — and if you see her about town or on Facebook (or anywhere else for that matter), take a minute to say a huge thank you to her for always delightful, witty and incisive reviews, which have graced these pages for many years.

The Good Nurse
A True Story of Medicine, Madness and Murder
By Charles Graeber 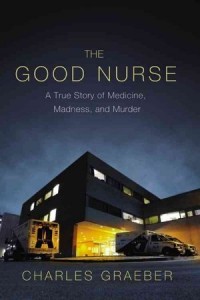 Corporate America and organized healthcare have a lot to reckon for with regard to taking health care from personal aid, medicine and bedside  reassurance to a money making enterprise with the dollar as God.  In doing so they have opened the door to people like Charles Cullen.  People with a rage and a desire to hurt others and themselves but lacking the will to walk up to a stranger and shoot them in the face.  Murder is murder but a step or so removed may be easier to digest.

The devil’s advocacy aside, there is a murderer who was allowed to operate in a multitude of hospitals with the ultimate outcome being the deaths of hundreds of patients.  Human resources ignored or removed evidence of suspicion and likely outright illegal activity to escape responsibility.  Subsequently Cullen was free to move on as he chose.

Charles Graeber is the only journalist he would talk to.  He is the only man who was given a firsthand view into the dangerously coherent psyche of a mass murderer.  Over 16 years, Charles Cullen murdered up to 300 patients in multiple hospitals.  He was investigated, he was terminated, he was promoted and demoted and scrutinized and in every case, until the very end, he was free to go.  To acknowledge his crimes was to admit fault in the system.  Clearly no one wanted to do that.

Graeber meticulously details the 16-year rampage.  He presents a mostly lucid, clever, occasionally compassionate father, son and boyfriend.  Many, many people turned a blind eye to something they surely suspected.  In frighteningly simple ways, Cullen administered fatal doses of easily stolen medicine to any patient he deemed fit.  Possibly his inability to kill himself manifested itself in the murder of hundreds of others.

Graeber does an excellent job analyzing not only the psychotic machinations of Cullen but the horrific culpability of these medical institutions. Criminal on all counts.  If it were not for a few brave people who fought tooth and nail to unveil the truth who know how much more Charles Cullen would have done.

An excellent book with a fascinating premise and a very clearly stated summation of event, The Good Nurse is a book you need to read.**

*  The Hippocratic Oath( or the updated declaration of Geneva)  is an oath historically taken by physicians and other healthcare professionals swearing to practice medicine honestly.There isn’t a legal obligation to take the oath but still as many as 98% of American medical students do.

** and personally, my next illness will be treated by a shaman and a bunch of squirrels out in my yard rather than some of these hospitals. ( I know, I know, im getting letters) sigh.