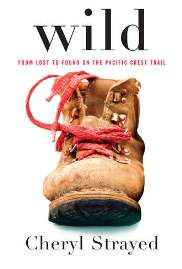 Right now my toenails are pink. They look very nice and I enjoy smiling down at them, but I can’t help feel a bit like a total spank. Cheryl Strayed lost six of hers. I’m guessing the remaining four were not visions of loveliness. Frankly, it’s a small sacrifice to have made in light of the enormity of her accomplishment both internally and externally.

She was lost and she decided not to rely on someone else to pick her up, not to whine, not to accept her state complacently but to get the hell up and do something. Ninety percent of success is showing up.

Cheryl had a tough childhood with no fatherly support and made subsequently predictable choice regarding men. She pushes away one man who could save her – knowing deep down she has to do it herself, and remains attracted to other men who will only make her feel worse. The loss of her mother sends her over the proverbial edge.

She is not a professional outdoors person. She is not a skilled backpacker. She has virtually no money and lots of time. She decides to do something alone. Something tough. Something where she will be left to face her inner demons with no distraction. She decides to hike the Pacific Crest Trail. Eleven hundred miles. From the Mojave desert up through California to Oregon to Washington state.

“When I had no roof, I made audacity my roof”.* It really is brilliant. I admire her audacity. She does too. Imagine the sense of accomplishment. The sense of pride in overcoming her own obstacles on her own terms. She just keeps on keeping on. She meets wonderful people (with the exception of the nasty old couple at the Whitehorse Campground.**). Everyone looks after one another in a way that is reminiscent of World Made By Hand. (1/09). I love that small community tenderness. It serves her well.

Not only is her trek worth discovery, but also her telling of her tale is quite well done. She has a natural ability to capture detail that makes wild an excellent book.***

Guess what, they closed. HA! What goes around comes around, meanies …