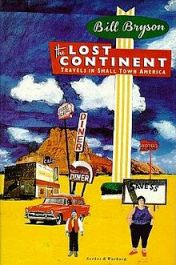 I live on a little under 10 acres.  It’s fairly private and we all sort of behave the way we like without fear of public scrutiny.

Upon re reading Bill Bryson’s book The Lost Continent, I laughed so hard and so loudly and so often that I was embarrassed and waited for someone to come scold me or at least make fun.

He is bar (almost) none, the most amusing writer.  It may be my practicular brand of sarcastic, snide, clever, back-handed yet kind humor, but Im not the only one.

I am sadly now at the point where I can re-read a book from years back and have it be only vaguely familiar.  Sad but it also excitingly opens a whole new world of literature.

Maybe I’ll start re-reviewing. That could be fun.  You could all send in nasty, pitying letters saying,” You didthat one two years ago.”  Oh well, maybe I have different thoughts on it.  Take that!.

Anyhoo. The Lost Continent is a series of essays on Bryson’s travel and rediscovery of his native country upon return from years and years in England.  He ran from Iowa as fast as he could and is now pining a bit so he has returned.  He is searching for his childhood and memories shared with his recently deceased father.*

As he travels in his mothers Chevette, we follow him through small-town America.

He succumbs to road rage, idiotic directions, angry gravel and angrier waitresses.  He eats Wiffle Ball Surprise and sleeps on  mattresses that sap his will to live.  As we are laughing, we are agreeing that the idiosyncrasies and glories of small-town America are what make us all who we are.  It’s a wonderful journey.

* For more brilliantly written along this vein read, The Life and Times of the Thunderbolt KId.  Maybe I will re-read that next …